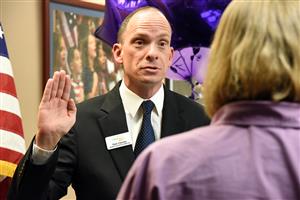 David (Dave) E. Cruson was appointed to fill a vacant seat on the District 49 Board of Education during the regular monthly meeting May 11. Cruson, appointed by Marie LaVere-Wright, BOE president, fills the seat vacated by David H. Moore. During a public meeting March 9, the BOE accepted the resignation of Moore, who relocated out of state for a new opportunity. Upon receiving Moore’s resignation, the board directors announced a sixty-day period to receive and consider applications to fill the vacancy. In Nov. 2015, voters approved a ballot measure that created five director districts across the 144 square miles of District 49 in eastern Colorado Springs and unincorporated El Paso County. Currently in a transition period, moving from a governance structure of five at-large seats to one seat in each of the five director districts, Moore’s vacated position required a new director to reside in either director district 1, comprised of the northern Powers Boulevard corridor, or director district 4 along the southern boundary. “We had multiple people that inquired,” said LaVere-Wright, “but all of the people that inquired lived in the wrong director districts so did not end up being able to submit an application.” When no applications from the two open director districts were received within the announced sixty-day period, LaVere-Wright, as president, was required by state statute to appoint a director. “Even though the sixty-day period had passed, I did ask Mr. Cruson to fill out the application that was part of our process,” said LaVere-Wright. The application was included in the publicly available information packet for the meeting. “Mr. Cruson has a deep history of service to our community and District 49,” said LaVere-Wright in an interview after the appointment. “He’s a father of two elementary school students and has served on his kids’ school accountability committee and the district accountability and advisory committee.” Cruson was sworn in after the other board directors had voted on action items.  “We purposefully did this appointment after the action items because otherwise he would have legally been required to vote on items that he wasn’t a part of the discussion that brought it onto the agenda,” said LaVere-Wright. Cruson participated in the discussion items on the meeting agenda and will vote on those items moved forward for action at the BOE meeting scheduled for June 8. “The skill set I hope to bring to the board is one of cooperation and care,” said Cruson in his application. “I very much prefer a collaboration style when it comes to a team decision. I make every effort to weigh pros and cons, while also thinking about the past and the future. I try to actively listen to one’s perspective, especially when it differs from my own. Once the decision is made, particularly in a group setting, I make every effort to suppress my own opinion for the sake of the group’s decision.” Cruson said he appreciates the collaboration required between the Board of Education and three chief officers in the district’s non-traditional governance structure. “The first and primary word I think of is team,” said Cruson. “I saw that in the development of the yes on 3B campaign before the ballot language became official. I attended the preliminary community meetings, to receive feedback from the community, and saw the vision that the board and the chief officers were considering for the future of District 49.” “While the chief officers are the paid leaders, I see the board as a policy making body that works in cooperation with the chief officers to set the stage of success for students, teachers, staff, parents, & community.”