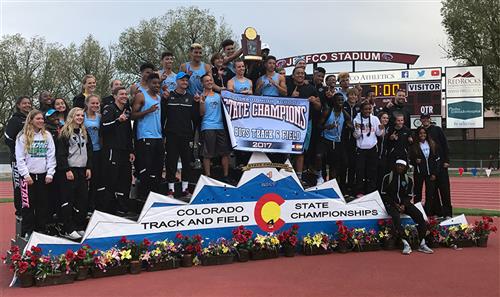 The state finals meet was postponed and shortened to two days for the first time in history. The Wolves, led by strong efforts from their sprinters, ran away with the state title, scoring 93.5 points. Air Academy High School in District 20 was second with 58 points.

"These kids put in all of who they are," said Erik Stevens, track and field coach, about the team. "They bought into everything we as a coaching staff asked of them."

On Saturday, the Wolves sprinted to an early lead when the 4x200 meter relay team comprised of seniors Gavin Urban, Isaiah Lapioli, Kendrick Cannick and Anthony Bellot won a state title with a time of 1:29.14. Fellow Colorado Springs school Harrison High School in Harrison District 2, placed second in the relay, finishing with a close 1:29:44.

Addison Settle, a senior, contributed to the VRHS state championship by placing second in the pole vault. His highest completed vault of 14 feet contributed eight points toward the team total.

Raymon Harper, a junior, also earned eight points with a second place finish in the long jump. Raymon jumped 22’ 9¼” inches while teammate Tristan Pratt, a junior, placed fourth for six points with a jump of 22’ 2½”.

Raymon also helped contribute to the state championship in the high jump where he and two other Wolves earned a total of 16.5 points. Raymon and senior Hunter Maldonado each cleared jumps of 6’ 5½”. Teammate Tristan Pratt, a junior, cleared 6’ 3½”.

On Sunday, the state champion 4x200 meter team brought another event title home for the Wolves, running the 4x100 meter relay in 42.16 seconds, beating Canon City High School by more than half a second.

The team continued to dominate in the relays when Isaiah, Anthony, junior Kobe Christiansen, and senior Joel Walker earned a state championship in the 4x400 meter relay with a time of 3:19.92.

The title was cemented when the Wolves added points in the 400 meter dash, triple jump and shot put.

"Winning a championship brings such a sense of pride and culture to any school," said Sam Baldwin, athletic director. "These kids sharing their experiences in that moment will encourage other Vista Ridge student athletes to work hard and set goals so they may one day experience that feeling too."