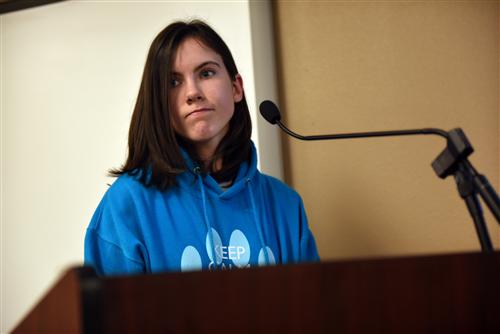 Every Saturday, Jones volunteered at the San Luis Valley Animal Welfare Society in Alamosa, where she was named volunteer of the year. Every week, she assisted the shelter’s adoption fair at PetSmart in Colorado Springs. She also continues to run its Facebook page.

What’s more, during the past year, she fostered eight dogs—three were sick and orphaned. She gave the 5-week-old puppies around-the-clock care for more than a month.

Jones is enrolled in the Academy of Health Sciences at Falcon High School. She is currently completing the emergency medical responder track, and is scheduled to start the technician track next year. Her intent is to work as an EMT to help pay for what she expects will be at least an eight-year college plan.

Her favorite classes are in the advanced placement category, especially those in math and science. Last year, she was recognized as the sophomore recipient of the science department award for achievement.

She even plays the saxophone in the high school’s wind ensemble.

After high school, Jones is planning to study veterinary medicine. Academically, she has consistently ranked in the top eight for Falcon High School’s class of 2016, according to Greg Morris, school counselor.

Morris describes Jones as a perfectionist who loves a challenge and “doesn’t settle for good enough.” Her preliminary SAT score was one of the highest in her class, but she’s still studying to improve it.

“When something means a lot to Rileigh, she goes after it,” said Morris. “When she says she’s going to do something, she does it, and she does it thoroughly.”

Morris has been highly supportive of her academic and career passions, according to her mother, Carolyn Jones.

“He has been fantastic the past three years,” she said.

“He helps her figure out which classes to take, based on her undergraduate major, and the entrance requirements.”

“He has even emailed, called and given us numbers of contacts to ask specific questions that he can't always answer.

“Mr. Morris believes in Rileigh and she trusts his guidance.”

It was Dr. David Sinha, a gifted and talented teacher, who prompted Rileigh to go for the presidential award, while helping her develop advanced learning program goals for the year.

One of her goals was to log her volunteer hours. She did it, and qualified for the highest Presidential Volunteer Service Award.

The presidential recognition is designed to set youth apart from their peers, providing a compelling example for other boys and girls interested in taking action in their communities.
Dustin Senger
dsenger@d49.org
719.499.5982