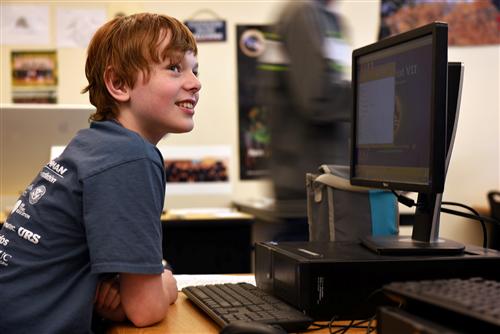 While many youth their age were sidelining their studies during the holiday weekend, two students were devoting hours to the defense of computer systems. Representing Falcon Middle School’s second entry into the annual CyberPatriot event, they had advanced to the semifinals.

“Nobody realizes how sitting in a chair all day can take up so much energy,” said eighth-grader Cole Snyder, after ordering lunch during the six-hour event. He had just started a test on Cisco. Specializing in routers and switches, it’s often thought of as the technology world’s plumber.

Snyder, 13, is part of the CyberPatriot team at Falcon Middle School, along with sixth-grader Colin Ralph, 11. As a two-person team, they competed in the national CyberPatriot VII middle school division semifinalist round Jan. 18 at Falcon High School in District 49.

Coach Thomas Russell, a technology teacher at Falcon High School, says it’s important to develop creative thinking and problem-solving skills, along with a charge of persistence.

“There’s only two of them—it generally takes six people to finish all these tasks,” said Russell, who typically forms eight high school teams of up to six participants. For next year’s competition, he’s trying to form at least one six-person middle school team. 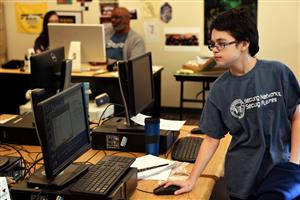 Russell says it’s important to join with a heightened interest in networking computers, “but even with the slightest interest in cybersecurity, this competition tends to hook them in.”

During the semifinals, as network administrators, Snyder and Ralph earned points by securing a system. They imaged three terminals with three operating systems: Widows 7, Windows Vista and Linux Ubuntu. Each terminal had dozens of vulnerabilities to find and fix.

Whenever technical issues mounted, they had the support of three members from Falcon High School’s CyberPatriot team, a two-time state champion. They were also able to submit general questions to Google, like how exactly a network might depend on File Transfer Protocol.

The competition was developed by the Air Force Association to inspire high school students toward careers in cybersecurity, as well as the related science, technology, engineering and mathematics disciplines, according to the official website at USCyberpatriot.org.

“When I was younger, I knew a lot about computers, more than anyone in my school, and I want to know more to help people,” said Ralph. “I want to be able to go into their house and secure their computers from hackers and viruses.”

Snyder sees himself pursuing a career in network administration, while using his cyber defense skills as a community philanthropist.

“If you think about it, so many times in games you run into a hacker,” said Snyder, explaining how hackers too easily find ways to cheat in games. 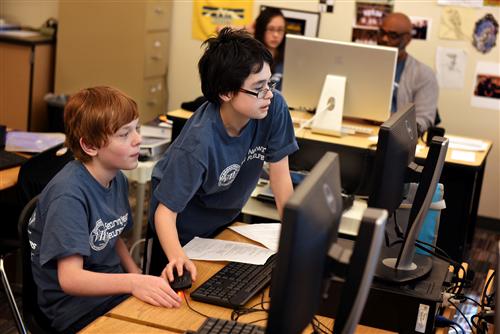 “One of the reasons I wanted to do this is my love for games—I want to help the community,” he said. “Help big corporations keep their files safe, as a job. Helping gamers play fair—trying to even the playing field for everybody—would be more of a side project.”

During the summer, Snyder will prepare to join a high school CyberPatriot team, while Ralph takes on a leadership role in the expanding middle school program.

While the top three middle school teams across the country will advance in March to the CyberPatriot VII finals in Washington, D.C., Russell says his students have already won. He’s not too concerned with the official results from the semifinals.

“I challenge any middle schooler to demonstrate what they know about how to maneuver these operating systems. Cole and Colin know what’s under the hood.

“They’ve already won because the skill sets they’ve been learning are way ahead of most high schoolers. These guys are creative and innovative.”
Dustin Senger
dsenger@d49.org
719.499.5982