Two teachers at Falcon Middle School are especially excited to start the 2021-22 school year. Braden Smart, band and choir teacher, and Ashley Lowe, language arts teacher, haven’t experienced a “normal” year yet as they started their careers when COVID first erupted. Smart started teaching last school year, and Lowe entered the profession during the 2019-20 year, when the pandemic began.

“I knew I was not going into anything normal last fall,” shared Smart. The world of music was particularly hit hard. “Singing became dangerous … playing a musical instrument became dangerous.” Smart should have started last school year with 50 kids in beginning band. Instead, he had about 15.

The fall 2020 semester started exclusively with online learning. “When we switched to hybrid, and I could hear the kids actually play, that really helped,” Smart said.

It wasn’t until spring that a live performance was on the calendar, but the night before, Smart tested positive for COVID. “Students were disappointed … but we made lemonade out of lemons.” During virtual class the next day, Smart prompted students to pretend to play instruments while he played a professional recording of the song they were to perform. Smart recorded the session and later shared it with parents.

Students ended the year playing for an audience only once. “The event was outside, and it was windy. I had to chase music everywhere,” Smart said.

Beginning band has nearly twice as many students this fall, according to Smart. “I am most excited to make music, and let the kids make music. There is nothing better.

For Lowe, time in the classroom with students gives her a more significant meaning as a teacher. “I had this grand, beautiful idea of being a teacher,” shared Lowe. “In reality, it was disappointing when the school year ended. I never got to say goodbye at the end.”

Lowe was able to encourage learners and colleagues along the way. “I remember one of my teammates having a bad day. I carried my laptop with 30 kids on the screen into her classroom,” she shared. “All of my kids showed how much they cared about her … it was a different dynamic for lifting someone up.”

The biggest lesson for Lowe has been self-discovery. “As a first-year teacher, I was trying to figure out my identity. COVID forced me to a bigger level … I’ve learned to appreciate uncertainty.”

The new school year brings students back into the classroom, interacting and creating relationships. “I can’t wait to focus on the true essence of teaching.” 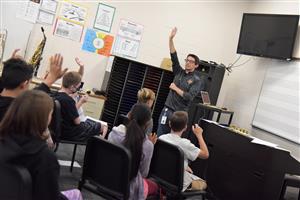 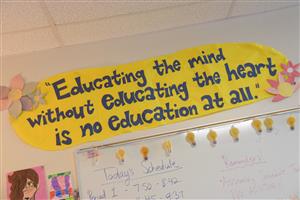