Serving those who serve our community: Friday, October 11 marked the inaugural Sunrise Salute at D49. The event welcomed local military, veterans, and first responders to D49’s Creekside Success Center for a pancake breakfast first thing on a chilly Friday morning. 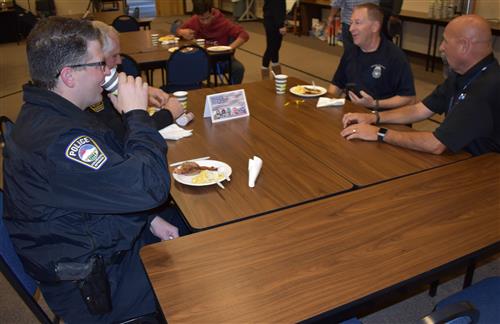 A few hands from the D49 student body along with some volunteers from Falcon Scout Troop #149, stood over a hot griddle whipping up a breakfast of pancakes, eggs, sausage and bacon for a hungry group of police.

“It’s fun cooking,” said Scout Darion Vastine, 11, as he flipped pancakes. “it’s all fun to do it for other people and serve for those who serve our state.”

“Coming out and seeing the smiling faces, especially when they’re trying to do something nice for us really warms my heart and makes me appreciate the community I live in,” shared CSPD Officer Daniel Thompson.

The early morning recognition included the posting of the Colors by the SCHS JROTC and the singing of the National Anthem. D49 Safety and Security member Dave Pratt was among the smiling faces on hand to greet the breakfast crowd.

“It’s really about relationships and spending time together when you’re not just working hard,” Pratt said. “You can play together, eat together, laugh together, reminisce together. It’s so important, and I think we need to do more of it.”

All told, the work crew had enough breakfast to feed a group of 200 visitors. As a chief support of the event, D49 Military Student Transition Coordinator Melissa Dashner, backed by the D49 Culture and Services office, plans to make the Sunrise Salute an annual gathering at School District 49.

“I’ll have it on my calendar again,” said David Husted from CSPD. “If you’ll be here, I’ll be here!” 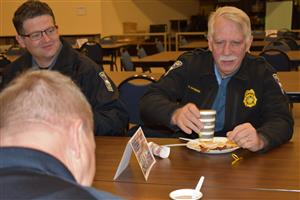 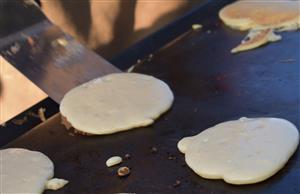