With dozens of tables draped in purple linens adorned tastefully with a spray of gold confetti, the Sand Creek High School commons area looked much more like a banquet hall  Jan. 26. In groups of two, sometimes three or more, guests slowly found their seats for the evening at the first-ever Purple Ball. 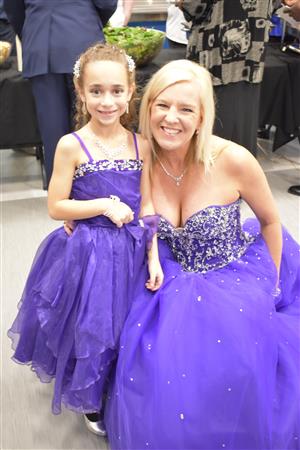 A crowd of more than 400 attendees including elementary, middle and high school students with their parents in tow gathered for the evening to recognize the work taking place with Student 2 Student (S2S) programs around Colorado Springs.

“I think I’ve moved schools, I’ve lost count, but it's like five or six times,” said Bailey Shaw, a senior at Falcon High School. “When I moved here, I was a seventh grader. I had no idea where to go in school. I didn’t have any friends.”

The Military Child Education Coalition (MCEC) supports the S2S program which gives students a chance to team up to welcome military-connected students into their surroundings when those students start at a new school. Like Bailey’s, military families average six to nine moves during a child’s educational career.

“We became good friends during freshman year, and I was a leader in S2S,” said Kegan Hoang, a senior at FHS who encouraged Bailey to join S2S. “S2S helps new students get used to their new school, make friends and get comfortable with their new atmosphere.”

S2S programs from School District 49, 20, 12, 3, 8 and 2 were invited to the Purple Ball which doubled as a networking event for military-connected families in the Pikes Peak Region. Students like Bailey and Kegan talked with their younger counterparts who are involved in eS2S at local elementary schools.

“I probably expect a collaboration of all the schools in the city,” explained Bailey. “I think being able to talk to people in our district gives us an idea about what es2s does in schools not just in our district but everywhere.”

A grant from the Wounded Warrior Project helped bring to life the Purple Ball which included dinner, dancing, formal pictures and other activities. The culinary arts program at D49’s Patriot High School prepared the meal and a local DJ helped turn the SCHS gym into a ballroom.

“It’s a great way to bring awareness to the program,” observed Paul Graham who accompanied his fifth-grade daughter, Cadence, to the ball. From a non-military family’s perspective Graham explained S2S encourages the importance of reaching out to all students, especially those who may have to move away one day.

“We’ve been affected by some of those close friends who have had to move,” he said. “But we teach them the saying ‘It’s better to have loved and lost,’ so we want to foster those friendships.” 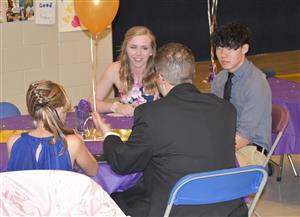 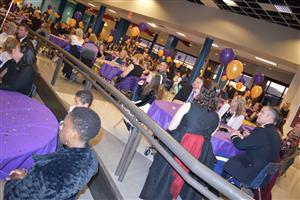 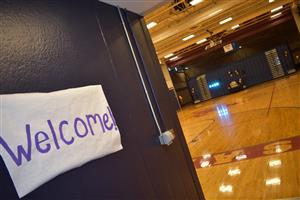