During a wrestling match at Falcon Middle School in 2015, an exact combination of factors including Kaine’s blood pressure, as well as adrenaline and oxygen levels, collided with potentially deadly precision, causing Kaine to go into cardiac arrest. “My heart was beating super fast, and then just sat there and fluttered a little bit,” he said.

A school administrator raced to find the school’s automated external defibrillator while others began CPR on Kaine. He was airlifted to Memorial Hospital where he received more emergency treatment. Kaine credits the initial CPR/AED response for saving his life.

“If they didn’t have the AED there I probably wouldn’t have survived that.”

Kaine now shares his experience to let others know they too can potentially save a life. PPEC principal Rochelle Kolhouse explained Kaine proposed several times to organize a school-wide CPR training course.

“It's what we want to see in education. We want to empower our students to be that voice and to take those initiatives and have that outreach,” Kolhouse said.

It all came together at the start of the 2018-19 school year. Led by Kaine’s introduction a team from the American Heart Association trained more than 60 students at PPEC staff in standard CPR techniques. Students spread out to practice on training dummies and later walked away with their CPR certifications.

“It makes me feel kinda safe that more kids know about it,” Kaine said.

“It’s that grit that will carry forward into college and into life,” Kolhouse said about what students also learned from Kaine’s example. “They’re not going to just let things go. They’ll have that tenacity.”

As a survivor, Kaine is motivated to keep the cycle of learning going. He is urging building leaders to equip their campuses with AEDs and explain how to use them.

“It’s just good to have that knowledge especially with kids this young,” Kaine said.

With its potential to give someone else a fighting chance at walking away from an emergency, his story is one worth telling. 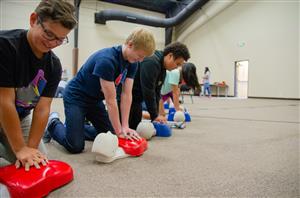 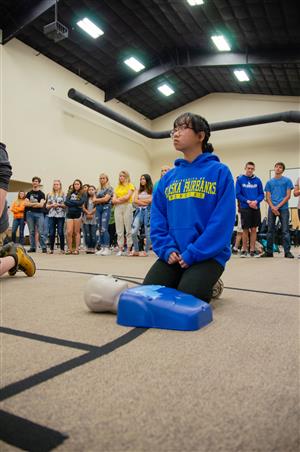 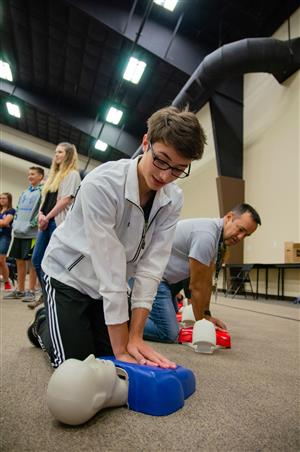