Alumnus Makes a Difference with Return to Scorpion Nation

Ezekiel Ford is serving his country and students at Sand Creek High School. As a 2020 graduate of Creek Nation, Ford completed his educational journey with plans for a military career. It didn’t take long for life to take him full-circle and back to the school he loves. This time Ford would fill a role on the school’s staff as a paraeducator. 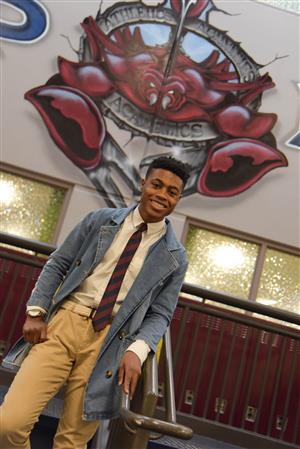 “It was during my junior year that I realized this community is tight,” he shared. “Everyone will do things for each other … it was great when I finally started to show up.” Ford found a passion for athletics as a track star and soccer player, and enjoyed all-school assemblies.

The COVID-19 pandemic interrupted Ford’s routine as his time in high school was coming to a close. “I was trying to fulfill my senior dreams, and everything was cancelled,” he said. “I quickly learned that during my four years in school, I had taken some things for granted. Being pushed online gave me a greater appreciation, and I realized it is a gift to come to school to learn.”

The senior discovered a silver lining when he was selected to speak at graduation. “I still go back and look at that speech … I was so nervous that I left my cap on the podium.” The words of an attendee who approached him after the ceremony still resonate. “Your speech moved me so much,” Ford recalls the person saying, “you need to keep speaking to generations.” Ford believes that day foreshadowed the eventual decision to return to Sand Creek.

Following graduation Ford joined the Colorado Air National Guard. “I went to Lackland AFB in San Antonio in August 2020 for basic military training.” Shortly after arriving, he was quarantined. Instead of a typical training experience, Ford and others in his unit received a book to read and study while in isolation. “I was a little behind, but ended up catching up quickly.”

“It was after all the military training that I had a gut feeling to come back to Sand Creek,” Ford explained. “I never got to say goodbye, and the faculty had done so much for me … these people are invisible heroes.”

His role as a paraeducator allows Ford to work with students who have behavioral challenges and others who simply need a helping hand. “I go wherever they need me, and I get to work with some of my favorite teachers.” One of his favorites is Edward Nelson, P.E. teacher. “When I first came back, I remember asking him, ‘What did you think of me as a freshman?’ He told me I was a smart kid, but I didn’t always know it.”

The student-turned-staff-member hopes to make a difference to students just like his teachers did for him. “I remember recently going on a trip to Washington, D.C., and when I came back and walked into a civics class, I heard, ‘Mr. Ford, we are so happy to have you back!’ The students all told me about their fall break activities … it was affirmation for me.”

The Scorpion team-member fulfills his military commitment as a “weekend warrior,” serving one weekend a month at Buckley Space Force Base in Aurora. “I am in the military because of my father who serves.” Ford’s ultimate goal is to receive a commission as an Air Force officer.

In the meantime, Ford will wrap up this round at Sand Creek at the end of the semester. In January, he’ll touch another dream and experience life as a college student on campus at Colorado State University, with plans to participate in their Air Force ROTC program.

“It’s been such a gift to me to come back and be in a position to impact lives.” 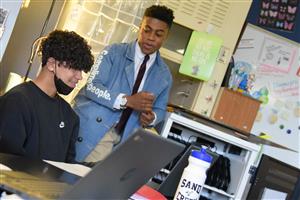 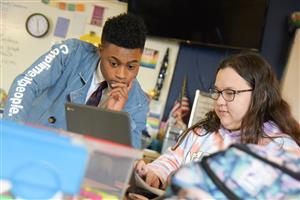