Special guests of honor included both parents and Falcon Nation staff members who have served our country. More than 50 honorees were in attendance.

“It was great to see all the men and women who have served and sacrificed for our great country honored at the Veterans Day assembly,” remarked Dr. Darryl Bonds, principal at Falcon High School. “It was a privilege for me to be a part of the ceremony, and to witness the respect and attention that students and community members show local veterans.” Dr. Bonds served six years in the Marine Corps Reserve.

Festivities included the JROTC cadets presenting the colors, and one of their own singing the national anthem. FHS band members added to the atmosphere by performing a service medley before the introduction of each military guest in a saber arch.

Former FHS JROTC commander Col. James Turner, U.S. Air Force (retired) shared a message with the crowd about the importance of appreciating veterans and how they have served everyone. “There are 20 million living veterans, and we have a duty to serve them,” he shared. “You can impact their lives just as they have affected yours.” 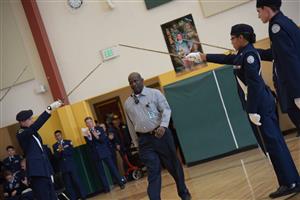 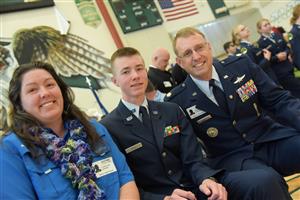 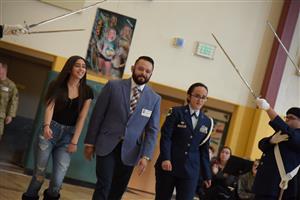