D49 Board of Education Directs Improvements to Paraeducator Compensation

The District 49 Board of Education voted in a special meeting this week to improve compensation for paraeducators. Their unanimous 5-0 vote approves a 14% or $2.34 an hour for paraeducators in D49. The unified directive seeks to address a current paraeducator vacancy rate of 28%, a total of 52 positions. 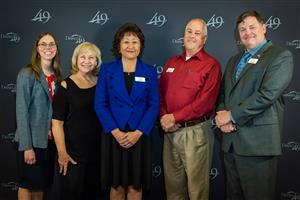 “Just as we have previously targeted bus drivers and special education professionals, we are responding where we have the greatest gaps and greatest vulnerability,” said Peter Hilts, D49’s chief executive officer.

“As positions remain unfilled, schools must adjust to make up for the lack of available backup adults to stand in the gap,” he said. “The shortage overloads those who are at work, requiring paraeducators to double up, often leaving teachers without classroom behavioral support, and critical messages might be dropped or delayed.”

The increase will take immediate effect, adjusting compensation for current staff and improving offers D49 can make to new hires. The overall annual cost to implement the change is $1.1 million, which will be offset by an expected increase in per pupil funding from the state and by cost savings from other unfilled positions across the district.

Under the new board directive, D49 will place an emphasis on recruiting qualified paraeducator candidates, seeking to reduce the current shortage by at least half before fall break in October.

Click link to see the recorded Board of Education Special Meeting on paraeducator compensation (Aug. 1, 2022)

The agenda and supporting materials are available here