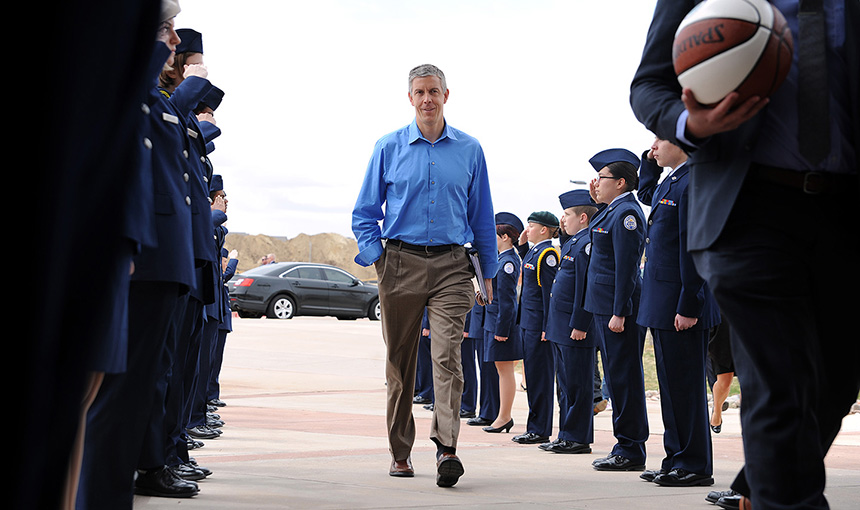 While classrooms were closed for professional development, more than 20 students arrived wearing purple Student 2 Student shirts. As part of a peer support network, they gathered to discuss military children with U.S. Secretary of Education Arne Duncan.

Petrie, 16, is finishing her second year with S2S, founded by the Military Child Education Coalition. She’s not planning to enlist – it’s her way to give back to military communities.

“When a new student comes into our school, we match them up with an S2S member,” said Petrie, who attended S2S leadership training last summer in Washington, D.C. “They introduce them to other people, sit with them at lunch … help them find their way around.”

S2S leader and 11th grader Maddie Brewerton, 17, who attended the training two years ago in Dallas, says it underlines “the importance of military kids and their education.”

Falcon High School’s S2S program has matured in recent years, expanding from a couple of students to more than 30, according to counselor Greg Morris. He says its main purpose is helping students in transition, which is often due to job losses or military relocations.

Duncan described it as an opportunity to learn how to keep two million military children academically successful, as well as emotionally and socially secure during tough times.

“As I travel the country and talk to service members, who’re either serving now or veterans, they never ask for anything for themselves. All they ask is ‘please do a good job taking care of my kids,’” he said.

Brewerton started the discussions with relocation hardships. As a daughter of a retired Air Force officer, she has lived in Panama, Puerto Rico, Utah, Virginia and Colorado. “Usually when you move, you’re either too far ahead of the school, or too far behind,” she said.

“I’ve got a daughter who’s a junior in college, who’s doing very well, but she went to 11 schools, to include five high schools,” said Arnold, who earned his commission in 1992. “The challenge is the lack of consistency, lack of standards across the board.”

“Colorado has been a real leader here,” said Duncan. “Over the past couple of years, states have been working together to raise standards, to have common college- and career-ready standards.”

“It’s a hard transition to higher standards, but we think it’s absolutely the right thing to do for our nation’s young people, especially for children connected to military families.”

Lammers called for ways that schools can proactively identify children of deployed parents, and offer more training for counselors in collaboration with military leaders. He said it’s often behavioral issues that lead to schools identifying children coping with deployments.

“We’d love to be able to start as a support, instead of come in with more of a disciplinary stance,” said Lammers. “Respect their privacy, but also be there for their students.” 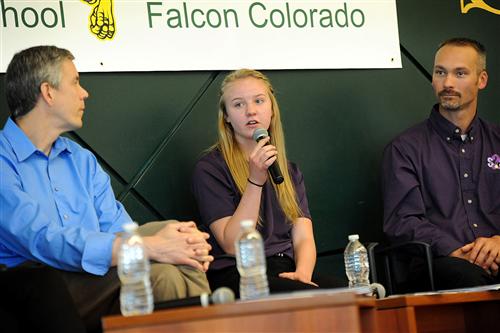 “We have about a million teachers who’re retiring over the next few years,” he said. “Our ability to attract and retain great talent the next four, five, six years is going to shape public education for the next 30.”

After the panel finished, Petrie described the experience as “incredible,” suggesting it helped her better understand military children. “I knew they had troubles with credits, but I didn’t know they could be like two years ahead or two years behind.”

“It was amazing to be next to someone that high ranking,” said Petrie, about Duncan, “and hear him be so humble and down to earth, and care so much about our students, especially military students and the issues that they’re facing.”

“I just talked to a young girl who wasn’t on the panel, who was in tears, whose father was deployed and no one knew,” said Duncan. “It was amazing that afterwards, this young girl in tears, she had five or six of these S2S friends with their arms around her.”

“I don’t learn sitting behind my desk in Washington,” he said. “I learn by getting out and talking to real teachers, and real kids and real families. In many ways, Colorado is helping to drive the country where I think we need to go.”