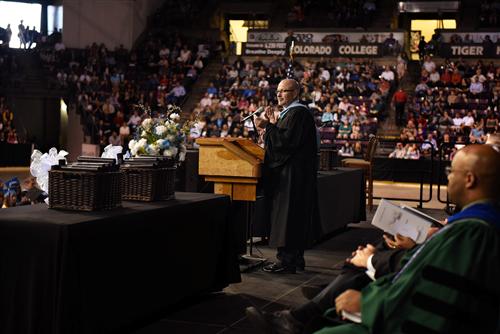 Broadmoor World Arena in Colorado Springs
Nearly 900 youth earned a diploma during the 2014-2015 school year by attending one of the five coordinated high schools in District 49. The district created a culminating photo album, and posted it on Pinterest for downloading.


A series of commencement ceremonies occurred in May. They started May 15 at Falcon Virtual Academy in Colorado Springs, where more than 50 students earning their degree through the blended-learning academy. A week later, approximately 70 students graduated May 21 from Patriot Learning Center, an alternative learning school in the Falcon area of El Paso County.
Immediately available on YouTube are the Falcon Virtual Academy commencement ceremony and Patriot Learning Center ceremony.

The three remaining commencement ceremonies took place May 23 at the Broadmoor World Arena in Colorado Springs. Falcon High School awarded more than 280 students during its ceremony, which was followed by nearly 260 at Vista Ridge High School and roughly 210 from Sand Creek High School.

Videos from the Broadmoor World Arena commencement ceremonies are scheduled to become available on DVD and YouTube by June 1.