D49 honored local military at schools across the district on Veterans Day, Nov. 11. The evening’s Fantastic 49 celebration continued the day’s theme of patriotism as JROTC cadets received accolades for their leadership, and one school’s Student 2 Student team was thanked for supporting military families. 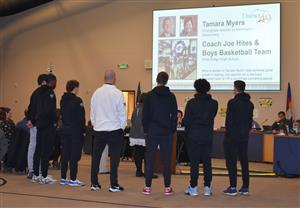 The event was kicked off with a color guard representing all three traditional high schools—Sand Creek, Falcon and Vista Ridge— presenting the colors.

Rocky Mountain Classical Academy’s Student 2 Student (S2S) Team was first to receive awards. The group of students and staff are dedicated to supporting military-connected families, and their extraordinary efforts have been noticed internationally. “These kids work extremely hard … their biggest focus has been how to bridge the gap between our civilian and military communities,” said Amber Kettinger, staff sponsor. “They welcome new students who transition to our school every day … they inspire me.”

The second part of the program included recognizing exemplary JROTC cadets. “I’ve worked in the district 17 years, and it never gets old recognizing great young men and women,” shared Chief Ben Brown, ROTC instructor. Cadets Brianna Phillips and Gabriel Mejia from Sand Creek High School were honored for their involvement with the D49 Cup Championship, a drill and fitness competition between D49’s three traditional high schools. “Joining JROTC has taught me an insane amount of values I’ll carry for the rest of my life … like leadership, teamwork and integrity,” said Mejia.

Two cadets from the Falcon High School Space Force JROTC were honored: Sydney White and Gabriela Elder. “Transitioning to a Space Force JROTC doesn’t change our mission of developing young men and women of character, and these two outstanding ladies exhibit that day every day,” shared Col. Franklin Hinson, ROTC instructor. Cadet White came to the FHS program from Patriot High School and expressed her gratitude for the opportunity, “This program has meant so much to me in the two years I’ve been in it. And thank you to my colonel … he’s been the most amazing supporter I could ever ask for.”

To conclude the presentation, Cadets Nathaniel Garcia and Kayla Parker from the Vista Ridge High School Air Force JROTC were honored. “Thank you allowing us to be here to brag on all the great work our cadets are doing,” said Col. Jon Ullman, ROTC instructor at VRHS. “We were out today at Grand Peak Academy for a flag folding ceremony and marched with our band at Stetson Elementary.” With numerous activities to take part in, Cadet Parker shared what she’s learned from the program. “I’m super grateful I’ve gotten to develop the friendships … I’ve been presented with so many great opportunities and been able to develop my passions.”

Fantastic 49 is the district’s recognition program that celebrates fantastic staff, students and community members before board of education meetings. A sincere thank you to Air Academy Federal Credit Union, Dion’s, Texas Roadhouse and Whirlyball for donating gift cards for all honorees. 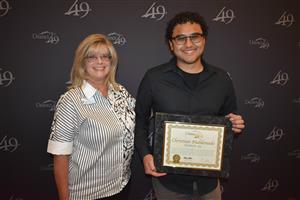 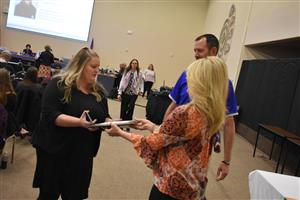