A small group of Springs Ranch Elementary Bobcats, with some help from their classmates, are sending a big thank you to staff who work with students with unique learning differences. 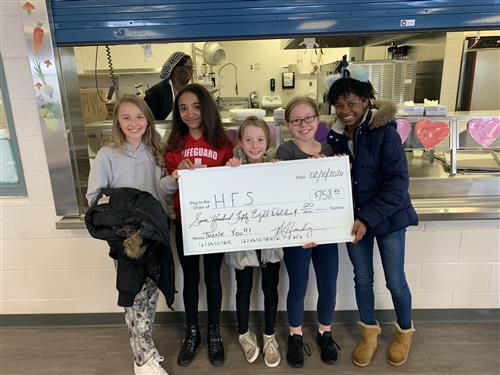 Inspired by a fellow student who communicates with sign language, a group of five fifth-graders pulled together a fundraiser to cover the costs of some basic equipment upgrades to support their teachers.

“I’ve seen our school do fundraisers for other stuff, but I wasn’t sure if this would happen,” said Karlie Steiner. “But it did!”

They hoped their idea of hosting an SRES Spirit Week would meet their goal of raising $600. For a dollar, students could add some flair to their appearance the first week in February. 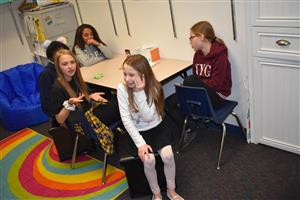 On February 10, when they were presented with an oversized check at lunch, the student organizers found out their classmates chipped in $758!

“They called us up, and we were eating lunch, and I thought are we in trouble?” Ashlynn Bolander recalled. Co-organizer Jaea Canody Dixon said any anxiety the group felt quickly disappeared.

“Everyone was like, clapping,” Jaea said. “And to see that we exceeded [our goal] felt very good.”

“We were talking about what we wanted to do,” added Mallory Campbell. “We never really thought that it was going to happen.”

“It’s rare for fifth grade students to take something on like this, especially when they are not getting a benefit out of it,” said Nikki Harding, SRES school counselor. “I think it speaks to the character and what amazing people they are.”

Harding explained the group asked SRES staff to create a wish list of equipment that could enhance their efforts. The amount raised will cover everything on the list.