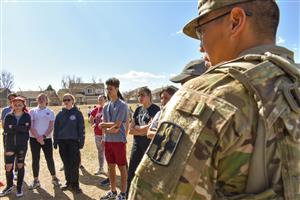 “I was thrilled. I’ve been thrilled for weeks,” said Conor Erhardt, SCHS sophomore, about the unique learning opportunity.

Conor and about 75 other students spent Friday, April 29 outside the classroom participating in a hands-on lesson plan that complements their coursework. Through a new partnership with the U.S. Army Recruiting Station (1580 Space Center Drive) and 627th Hospital Care Unit at Ft. Carson, combat medics explained the basics of tactical combat casualty care.

“I think this is a great event to transition from: this is the side of how to do (civilian) medical training in relation to how the military does medical itself,” said SSG Clinton Danforth, U.S. Army Recruiter.

Many of the students are enrolled in William Yerger’s Health Science class at SCHS, which covers different fields of medicine. Others, including the SCHS Junior Reserve Officers’ Training Corps (JROTC), and a group from Falcon High School’s emergency medical technician program were invited to jump into the action. 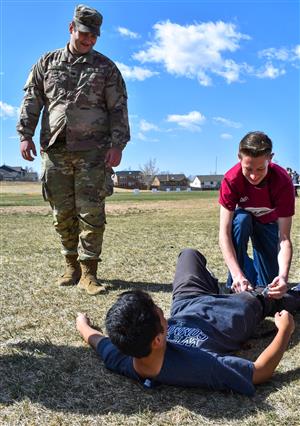 The first part of the day saw groups of students rotating through stationary displays where they learned a progression of battlefield life-support treatments. Combat medic instructors covered fundamentals such as proper application of tourniquets, assisting breathing and slowing bleeding.

“He showed how we would package the wound by pushing gauze down into it, which freaked me out a little bit,” Conor said.

The army instructors introduced students to the same mannequins used in military training scenarios. The state-of-the-art equipment is designed to create a realistic learning experience.

“It’s cool to see the reactions,” said SGT Kandriss Spencer, a combat medic. “It's very interesting, and I love how they can retain the knowledge and understand how they not only get the military perspective but also the civilian side.”

After an in-the-field style lunch made up of meals-ready-to-eat (MRE), the guest instructors challenged student groups to practice their training. Working as a team, students completed a complex scenario that involved pulling a wounded soldier to cover, applying general life support and carrying them to an evacuation point.

“I just think it’s so cool being able to learn these things,” Conor said. “I want to branch off into EMT, or medic, and it’s really cool to be learning about how they do things.”

Mr. Yerger explained that the students participating in the exercise will take away practical experience that could launch them to success.

“We sparked an interest,” Yerger said. “You don’t know what you want to do until you experience something. These kids are out here because they want to know whether healthcare is a career they want to pursue.” 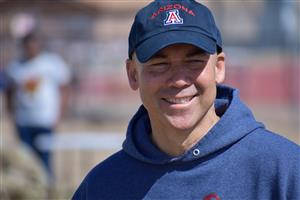 The training could provide some clarity. Although some students may pursue a future in the military, guest instructors observed the techniques taught in this exercise overlap and fit neatly into the civilian sector, where there is a need for medical professionals.

“I love teaching. I know some (students) are ROTC, some are EMT,” said SGT Spencer. “Getting them to see how we run things, and having them interact; hopefully (we’re giving) them an idea about what they could do and the options they have out there. It’s really cool to see.” 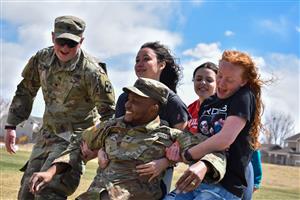 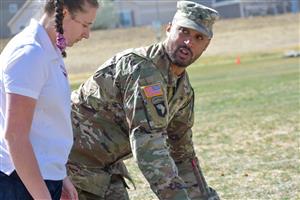 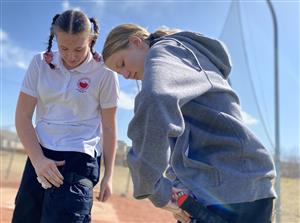