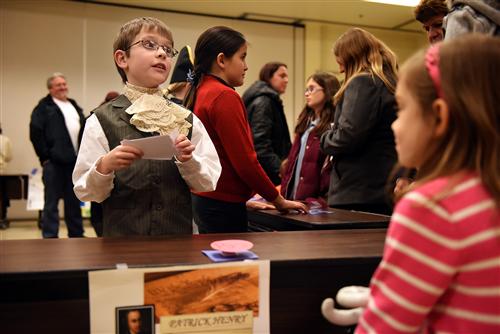 Hundreds of families arrived for gallery night presentations Dec. 17 at Pikes Peak School of Expeditionary Learning in District 49. Students from preschool through eight grade had found creative ways to demonstrate and explain their learning as content experts.

Andy Bernard listened to his daughter, eighth-grader Hannah Bernard, 13, explain a letter from the World War I western front. The seventh- and eight-grade expedition was called “The Great War,” where students studied World War I propaganda, veterans, technology and other elements of the time and situation. The students followed the guiding question, “What does nationalism do to a country?”

Hannah wrote a letter that a U.S. solider might have sent his wife in January 1916. 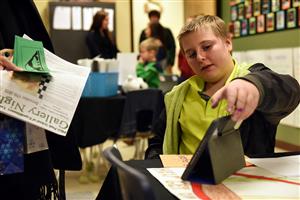 Sixth-grader Nathan Burkholder, 12, explained his multimedia “Mullein Busters” report. During their “It’s Alive” expedition, sixth-graders studied the characteristics of living things, knowing there’s a correlation between the form and function of all life, which is driven by the need to survive.

Nathan, along with three other classmates, are starting a nature club. The members will look for ways to best mitigate the spread of mullein, a plant that was inadvertently brought by early European settlers to Colorado, where it has become difficult to eradicate.

Fifth-grader Ian Stratil, 10, was explaining the life and legacy of Patrick Henry, while demonstrating content mastery and presentation skills, as developed during the fifth-grade “The Story of U.S.” expedition. They took a narrative approach to understanding U.S. history, and the people who shaped it, while answering the guiding question, “What is worth fighting for?” 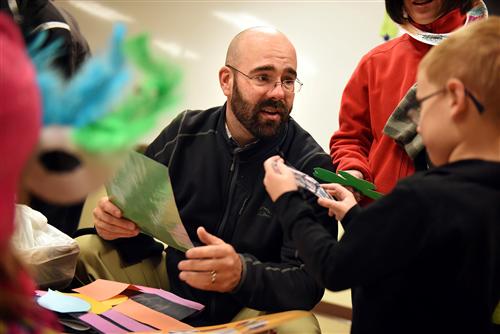 Chad Poulin listens to his son, kindergartner Cole Poulin, 5, explain handcrafted artifacts based on communities from around the world. Kindergartners were on an “It’s a Small World After All” expedition. They studied cultural differences while building an appreciation for global travels, including where their own family’s migratory travels.

The kindergartners followed three guiding questions: “What makes my family unique?”, “Why has my family changed over time?” and “How is my family life the same or different from other children around the world?”

Preschoolers took the “Storybook Journeys” expedition. They used their favorite tales to take part in an assortment of literacy and math activities, including the use of props and puppets in a video production of plays. As a final project, they each wrote a page for a classroom book about the gingerbread man. 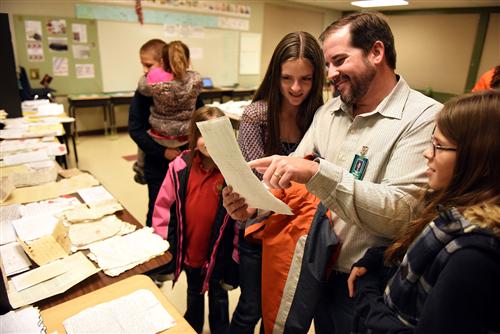