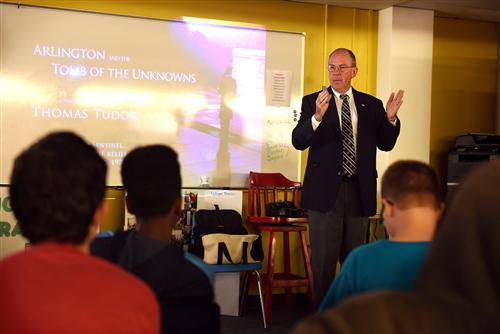 Thomas Tudor, president of the Society of the Honor Guard, Tomb of the Unknown Soldier, explained sentinel duty at Arlington National Cemetery for middle school students Oct. 5 at Patriot Learning Center in District 49.

“I volunteered for the hardest job I ever loved,” said Tudor, about his service as a tomb guard from February 1969 to May 1970. The Colorado Springs resident explained Arlington National Cemetery’s history, as it developed from a potter’s field to hallowed ground. He highlighted wars, operations, presidents and military service and sacrifice.

The Tomb of the Unknown Soldier represents the missing and unknown servicemembers who died in defense of freedom, giving up their lives and identities. Guards are selected and trained to honor casualties with dignity, diligence, reverence, respect, perseverance and perfection, according to The Sentinel’s Creed, which Tudor continues to recite from memory. 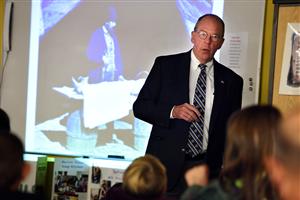 “We consistently rendered full military honors to the individuals in the graves,” said Tudor, describing the 21 steps guards took up and down the mat, during his service as a sentinel, and then a relief commander. “If you couldn’t glide, you couldn’t guard.”

The discipline required often took them beyond what they thought they were capable of handling, he said.

“Our uniforms were absolute perfection, always within 1 millimeter of the specs,” said Tudor, while showing how guards marched on their heels to keep their trouser stripes straight.

Through all weather events, they marched on. Exits to a sentinel box mostly occurred when lightning storms felt poised to strike their rifle’s bayonet. But several non-weather events tested Tudor’s resolve to remain in motion without emotion. 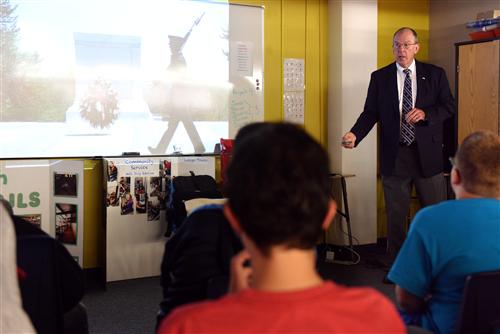 The school’s presenter described the day a bumble bee landed on his nose: “I could feel his hind legs in my nostrils.” With students still laughing about the day a squirrel crawled up his trousers without breaking his bearing, he described a visitor who tried to frame a photo of his steady face, while inadvertently holding her camera backwards.

“I’m sure she got a great closeup … of her eyeball,” he said.

Since his service, Tudor has been an entrepreneur and a five-term Rotary International Club president. His advocacy for the Tomb of the Unknown Soldier has taken him to hundreds of locations across the United States, from schools to libraries, from museums to military bases.

Teacher Kim Brown, who coordinated his visit to Patriot Learning Center, was pleased by the students’ silence during the presentation, a sign of their attention, she said.

“People like Mr. Tudor are walking around in our community all the time,” said Brown. “So, showing respect for your elders in public, and being kind and looking people in their eyes, is important. You never know who you’ll meet. 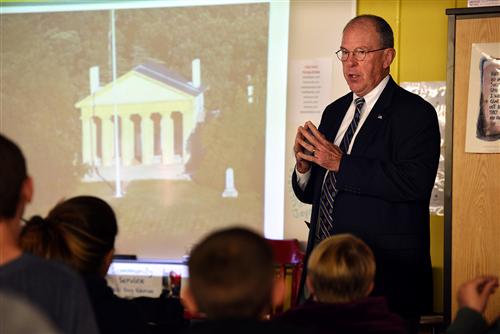 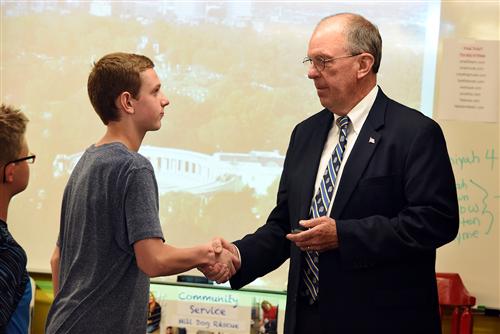