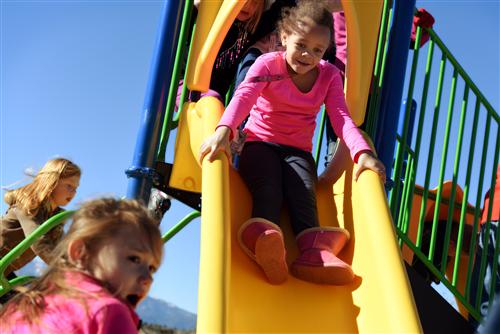 With volunteers signed up for the community build project, the new playground, valued at more than $20,000, was constructed in December. The K-12 blended-learning facility’s administration secured it through winter break, and the subsequent weeks of cold, snowy weather.

With a warm day and lots of primary school students arriving for Wednesday classes, the ribbon was cut and the playground was officially opened.

“We never had a slide here before—I’ve been waiting for it,” said fourth-grader Frusseta Lemus, 10, surrounded by children rushing onto the slides, ladders and monkey bars—some scooping pieces of severed ribbon as souvenirs. “I always wanted to slide down a slide at my school.”

Jodi Fletcher, assistant principal, was humbled by the support for the expanding facility, which opened in September 2012.

“We just want to thank our community for the great support,” said Fletcher. “Without their votes… our students couldn’t have won without them.”
Dustin Senger
dsenger@d49.org
719.499.5982