Kindergartners Show ‘Thanks’ to Veterans 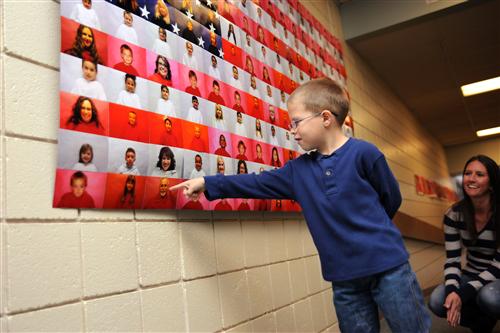 They arranged their photos into a U.S. flag and presented it Nov. 11 during a Veterans Day assembly.

The flag is now positioned near the school’s entrance. Kindergarten teacher Angie Moore, who led the project, said the idea had been done several years ago, but at a much smaller scale.

“I thought, ‘Let’s do it much larger, a whole grade level,’” said Moore. “It was a way for us to come together and do something for our community. It was our kids doing something special as a class.”
Dustin Senger
dsenger@d49.org
719.499.5982