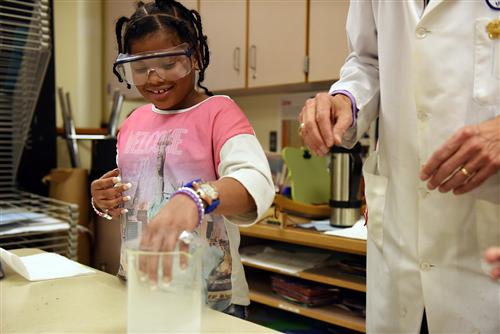 “We wanted our students and parents to get excited about STEAM through activities outside what we do during the regular school day,” said event coordinator and teacher Alicia Klausmeier. While the school had offered the event before, she wanted to make it different. Instead of keeping it faculty driven, she reached out to numerous community partners to bring more perspectives and opportunities.

“We’re seeing the kids engaged in the presentations — you can hear exciting comments coming out of each room,” said Klausmeier. “They’re saying ‘this is fun,’ while making important connections.” 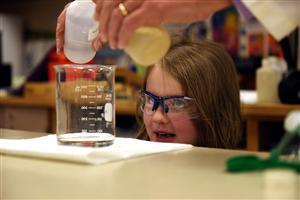 As families walked the hallways, navigating through a display of individual and collaborative art projects, they entered classrooms with engaging activities, from programming humanoid robots to understanding the differences between acids and bases. Outside the building, volunteers from the U.S. Air Force Academy’s Civil Air Patrol were helping children launch air-powered rockets.

“We’ve been to a lot of schools, as a military family, and this has been the only one to offer a science night,” said Ashley Currin, after watching her daughter, first-grader Eva Currin, 7, demonstrate a chemical reaction that changed a fluid from orange to black. The experiment was led by Dr. Ron Furstenau, a professor of chemistry at the U.S. Air Force Academy.

As the Cool Science board president, Furstenau travels throughout Colorado Springs to keep science fun for kids. 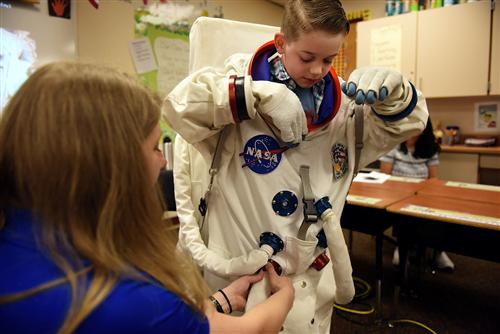 “The scientist is incredible — he’s getting the kids excited and he interacts so well with them,” said Currin, who says her family performs lots of science projects at home, but the evening was an opportunity to experiment with less conventional materials.

“Sometimes having that hands on approach — touching stuff, doing stuff — it’s a different way of learning for them,” said Sean Dastas. After his second-grader participated, he stuck around to ask Furstenau about a chemical reaction that created a solid compound from a liquid.

“Her whole family likes science, so it’s one of her favorite things,” said Jay Ashley, after watching his daughter, third-grader Alayah Ashley, 8, learn about the low boiling point of liquid nitrogen. “This is a creative way to get them to learn outside the classroom.”

Third-grader Xavier Bremer, 9, dressed for space with the help of Tanna George, Challenger Learning Center educator, who was explaining space exploration, including the hours long process of preparing for a space walk, and the 300-feet of water-filled tubing that helps astronauts regulate their body temperature.

“He’s been wanting to get called up all night,” said mother Brittany Bremer. “This is what he was most excited about. Huge smiles. It’s been fun. We’re seeing all kinds of neat stuff — we’ve had a blast.”

“Tomorrow at school the kids will be asking all about again,” said Klausmeier. 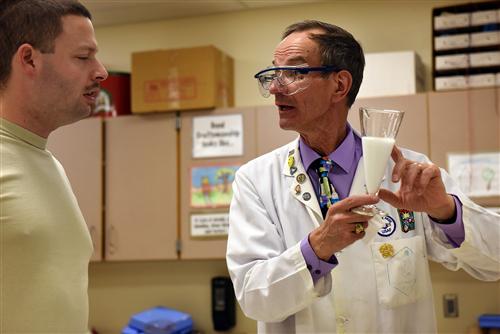 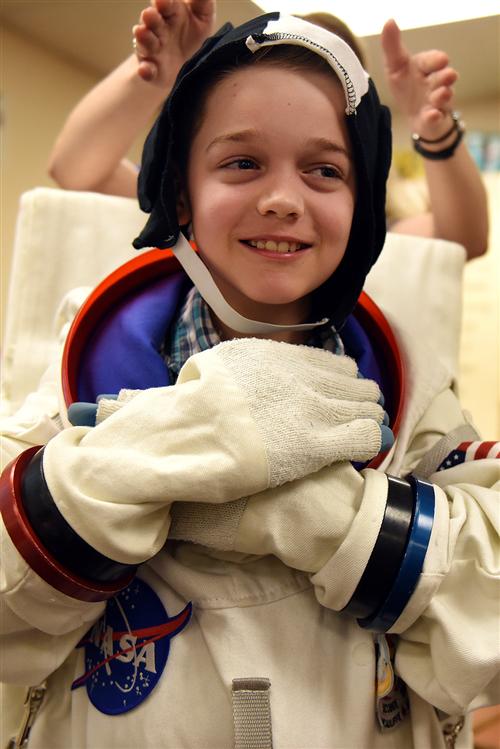 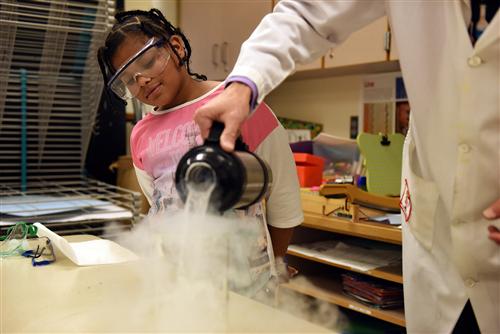