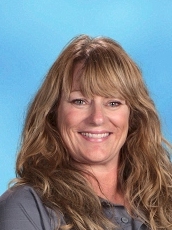 Mrs. Murphy has taught for twenty-three years. She graduated from Eastern Washington University with a bachelor of arts in education and later from National Louis University with a masters in curriculum and instruction.

Mrs. Murphy began her teaching journey in Lancaster, California where she taught for three years.  She married Darryl Murphy who served in the United States Air Force, and they then moved to Rhein-Main, Germany for four years.  The military moved them many times until they landed in Colorado Springs where Mr. Murphy has since retired from the military and now works for the government. Mr. and Mrs. Murphy have two children, Toree who is a senior at Indiana Tech University where she plays lacrosse, and Ty who is an eleventh grader at Falcon Middle School.  They also have two dogs, Kira  and Boomer.